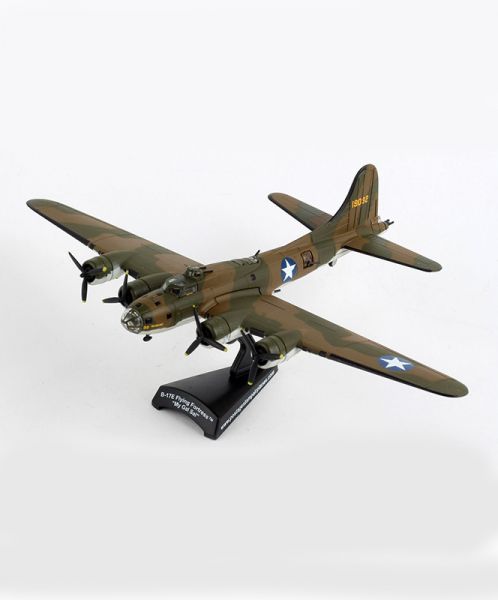 Be the first to review this product
$30.95
Availability: In stock
SKU
MODL226154
Notify me when the price drops
Add to Compare
Details
"My Gal Sal" is a Boeing built B-17E Flying Fortress whose pilot was forced to land it on the Greenland icecap during World War II. Many years later, it was recovered and taken to the USA to be restored. It is one of only three intact B-17E's in existence.

On 27 June 1942, B-17E, 41-9032 - part of the 342nd Bomb Squadron of the 97th Bomb Group - was one of 13 B-17s flying the Labrador-to-Greenland leg of a ferry flight to the United Kingdom as part of Operation Bolero, the military build-up in Europe. Inclement weather broke up the flight; five B-17s returned to Labrador, while the remainder continued on to Greenland. Over Greenland three of the aircraft were forced to land by the weather, including My Gal Sal.

The airplane's propellers were damaged by the landing, which kept the engines from being run to generate power needed to use the radio. It took an entire day, but the crew cut off the tips of one of the propellers so that an engine could be run and they were able to make contact. The aircraft's crew camped in the B-17 for nine days until a rescue airplane could arrive. They had to hike the 26 miles to a lake where the rescue airplane had been able to land.

The aircraft was abandoned, not to be seen again until a 1964 overflight by a USAF reconnaissance aircraft. At that time, "My Gal Sal" appeared to be intact. Thirty-one years later, My Gal Sal was recovered from the ice, although high winds had flipped the plane completely over and damaged it. The plane was restored to a static configuration at Cincinnati-Blue Ash Airport in Cincinnati and is now on display as part of the collection of the National World War II Museum in New Orleans, Louisiana.