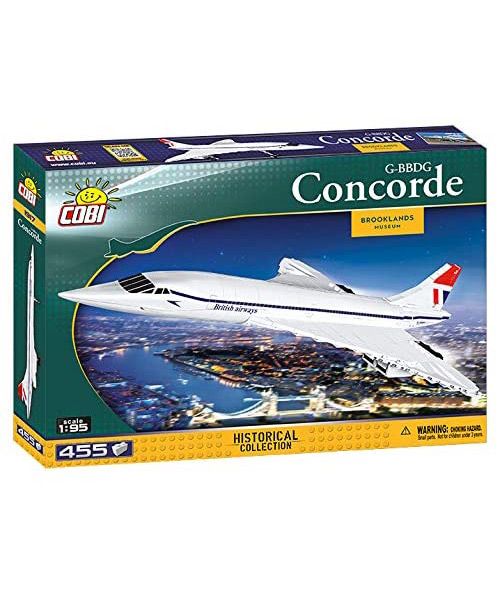 $59.95
Availability: In stock
Only 1 left
SKU
TOYS244873
Notify me when the price drops
Add to Wish List Add to Compare
Details

Concorde is a supersonic passenger aircraft. It was an idea by companies operating both from France and the United Kingdom to offer supersonic flight. It first flew in 1969. Seven years later, it was put in service that lasted 27 years.

It flew mostly on transatlantic routes. From London's Heathrow (British Airways) and the Paris port of Charles de Gaulle (Air France) to JFK Airports in New York and Dulles in Washington. It reached record speeds; the flight lasted half the time as traditional aircraft. Due to the high production costs and expensive operation, only 20 units were produced. Concorde's last flight took place on November 26, 2003.

From the world of COBI comes a model that features the Concorde G-BBDG supersonic passenger aircraft. This was a test model for British Airways. For several years it was used on test flights & never entered service. Over time, it began to be used as a base of spare parts for the other craft that were in service. Since 2003, the aircraft has been exhibited at the Brooklands Museum (Weybridge).

The Concorde brick kit is accurately mapped using as many as 455 parts.Using high-quality stickers to reproduce the markings on the plane, this model will really please those designers who like details in their kits. The high quality of this set means that the stickers do not wear out over time or when playing with the baby's hands. The plane is equipped with a fully operational landing gear. When the wheels are extended, they can be turned. The rudder direction is also movable.

This model of Concorde is an excellent set for all aviation enthusiasts as well as fan on block building kits. Original Brooklands museum license