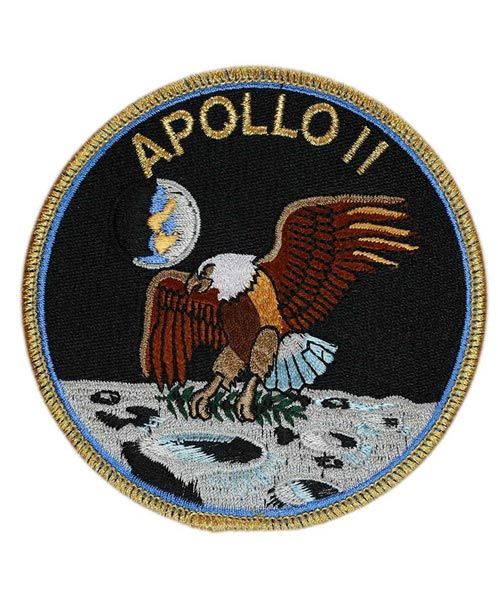 $7.00
Availability: In stock
SKU
ACCS171551
Notify me when the price drops
Add to Compare
Details

Celebrate one of mankind's greatest achievements. On July 20th, 1969 the Apollo 11 mission landed on the Moon. This is the original NASA patch worn by the crew.

The World's first lunar landing and return. All three stages of the Saturn V fired normally and on time. The Command Service Module (CSM) separated, turned and docked with the Lunar Module (LM). A single spacecraft firing was utilized to escape Earth orbit and set a course to the Moon. In the vicinity of the Moon, the crew sent back a 29-minute color TV transmission. The Commander and the LM pilot undocked the LM and descended to the Moon's surface, landing on the Sea of Tranquility on July 20, at 4:17 PM EDT. Six hours later at 10:55 PM EDT, Neil Armstrong became the world's first human to walk on the Moon. He deployed a television camera and the event was seen by an estimated half-billion people on Earth. The astronauts collected Moon rock samples and conducted scientific experiments. They also talked "live" to President Nixon. Lift-off from the Moon occurred on Monday, July 21 at 1:54 PM EST. Rendezvous with the CSM was accomplished and, after jettisoning the LM ascent stage, the CSM fired its engine to return to the Earth. Six additional live TV transmissions were made on the return trip home. Splashdown occurred July 24 in mid-Pacific after a flight of 195 hours, 18 minutes (eight days, three hours, 18 minutes).