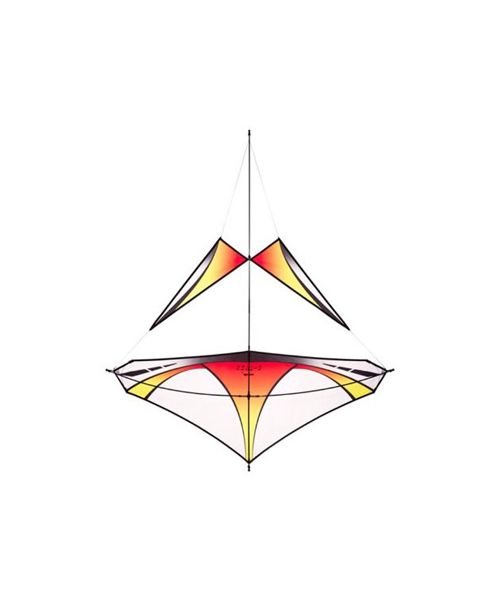 Be the first to review this product
was $92.95 Special Price $55.77
Availability: Out of stock
SKU
TOYS243526
Notify me when the price drops
Notify me when this product is in stock
Add to Wish List
Details
Imagine a kite that glides magically on the lightest air currents, defying gravity with the lift of a high-performance sailplane and the weight of a first-class letter. Toss it as a glider with no string attached, or soar through the sky with precise control just by pulling and releasing the line. The Zero-G is a true canard-style aircraft, with the smaller wings facing forward in tethered and gliding flight. Unlike traditional kites, it will glide like a airplane when you release the line, making it incredibly easy for beginners and experts alike because it can't stall and fall out of the sky. Pull it up over your head and then slack the line to watch it glide as far as space allows, tantalizing you to skip out of work early on those light wind days. The Zero-G was inspired by Reinhold Platz, chief designer for the Fokker Aircraft Company after WW1. Decades before the popularization of the hang glider, he built and flew a full-scale canard-winged craft that folded up to carry on a bicycle. Not much is known about his glider experiments, but a few grainy photos from 1920 exist and provided the inspiration for the Zero-G design. With small wings in front, the canard configuration allows a virtually stall-proof glider that will float eerily in a level attitude even when it's barely flying forward. WIth its tensioned-fabric wing and minimalist structure, the ZG is high-tech flying art that looks as good as it flies. Hang it on the wall when you're not flying and watch form and function dance together in this remarkable flying machine.Packs up small in a protective zippered shell case, includes an ultralight carbon fiber frame, ripstop polyester sail, custom molded fittings and 100 feet of 30# flying line on a polycarbonate winder.
More Information
Reviews
Write Your Own Review
Related Posts