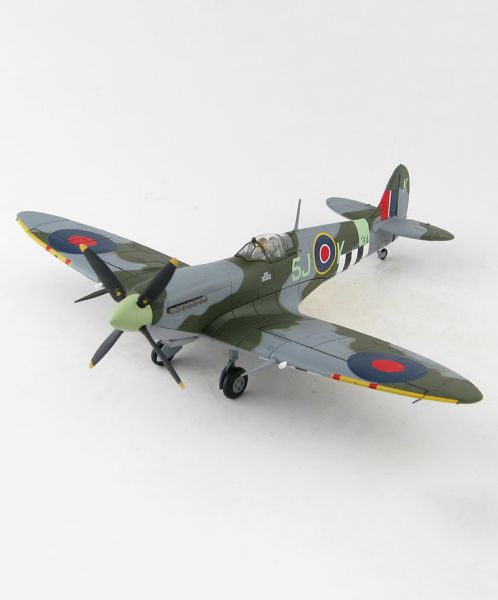 $99.95
Availability: In stock
SKU
DESK215490
Notify me when the price drops
Add to Compare
Details

In May 1944, No. 126 (Persian Gulf) Squadron was equipped with the Spitfire IXc and providing escort for bombers over north-west France as well as protection for the growing armada being assembled for D-Day. In July 1944 No. 126 was stationed at Harrowbeer and Squadron Leader Johnny Plagis was commander flying Spitfire IX 5J-K ML214; that wore Kay, after his sister, and Muscat, a city in Oman. In July and August Plagis scored four victories but in September he was hit by flak. Plagis survived but the aircraft was lost.

The Supermarine Spitfire is a British single-seat fighter aircraft used by the Royal Air Force and many other Allied countries during World War II and into the 1950s as a front line fighter and in secondary roles. The Spitfire was first flown on March 5, 1936 and entered service with the RAF in August 1938. It served in several roles, including; interceptor, photo-reconnaissance, fighter bomber, carrier-based fighter and trainer. The Spitfire was built in many variants, using several wing configurations. It was produced in greater numbers than any other British aircraft and was the only British fighter in continuous production throughout the war. When production ended in February 1948, a total of 20,351 Spitfires of all variants had been built.

Hobby Master is a manufacturer of high quality, pre-built, diecast models. Each model is crafted with meticulous attention to detail, using specifications of the original aircraft or vehicle. They are made with die-cast metal and some plastic components.