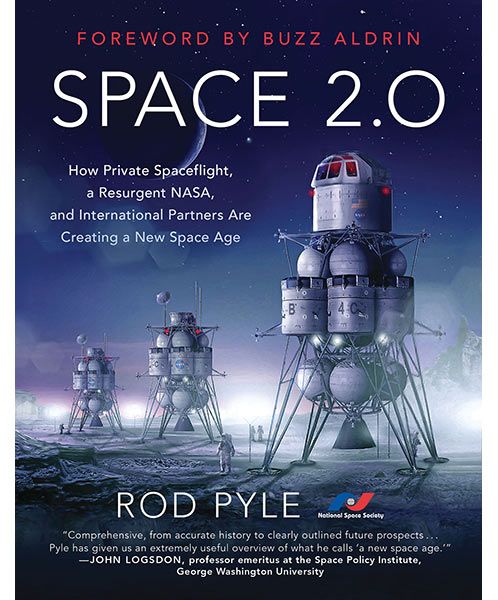 Carrying the Fire An Astronaut's Journeys

$21.95
Availability: In stock
Only 2 left
SKU
BOOK102005
Notify me when the price drops
Add to Compare
Details

Space 2.0: How Private Spaceflight, a Resurgent NASA, and International Partners are Creating a New Space Age

We're on the cusp of new era in the great adventure of space exploration and development.

More than a half-century ago, humanity first hurled objects into space, and almost 50 years ago, astronauts first walked on the moon. Since then, we have explored Earth's orbit with shuttles, capsules, and space stations; sent robots to Mars, Venus, Mercury, Jupiter, Saturn, and Uranus; sampled a comet; sent telescopes into orbit; and charted most of our own planet.

In Space 2.0, space historian Rod Pyle, in collaboration with the National Space Society, will give you an inside look at the next few decades of spaceflight and long-term plans for exploration, utilization, and settlement.

No longer the exclusive domain of government entities such as NASA and other national agencies, space exploration is rapidly becoming privatized, with entrepreneurial startups building huge rocket boosters, satellites, rocket engines, asteroid probes, prospecting craft, and even commercial lunar cargo landers to open this new frontier. Research into ever more sophisticated propulsion and life support systems will soon enable the journey to Mars and destinations deeper in our solar system. As these technologies continue to move forward, there are virtually no limits to human spaceflight and robotic exploration.

While the world has waited since the Apollo lunar program for the next "giant leap," these critical innovations, most of which are within our grasp with today's technology, will change the way we live, both in space and on Earth. A new space age--and with it, a new age of peace and prosperity on Earth, and settlement beyond our planet--can be ours.

Speaking with key leaders of the latest space programs and innovations, Pyle shares the excitement and promise of this new era of exploration and economic development. From NASA and the Russian space agency Roscosmos, to emerging leaders in the private sector such as SpaceX, Blue Origin, Moon Express, Virgin Galactic, and many others, Space 2.0, examines the new partnerships that are revolutionizing spaceflight and changing the way we reach for the stars.