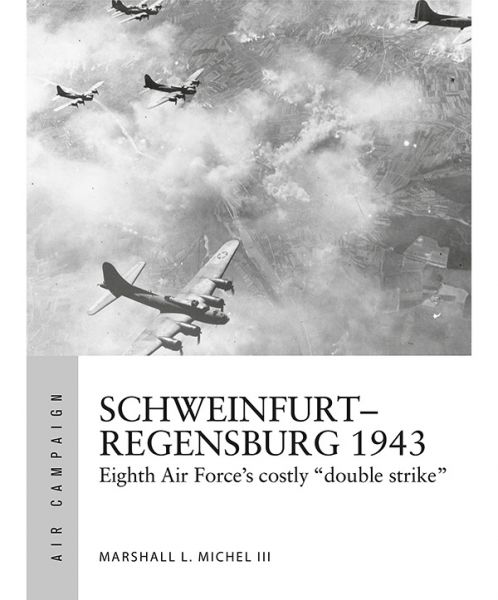 $24.00
Availability: In stock
Only 2 left
SKU
BOOK106308
Notify me when the price drops
Add to Wish List Add to Compare
Details

This is a new history of the US Army Air Force's pioneering but costly raids on Germany's Messerschmitt and ball-bearing factories in World War II.

In 1943, the USAAF and RAF launched the Combined Bomber Offensive, designed to systematically destroy the industries that the German war machine relied on. At the top of the hit list were aircraft factories and plants making ball-bearings--a component thought to be a critical vulnerability. Schweinfurt in southern Germany was home to much of the ball-bearing industry and, together with the Messerschmitt factory in Regensburg, which built Bf 109 fighters, it was targeted in a huge and innovative strike.

Precision required that the targets were hit in daylight, but the raid was beyond the range of any existing escort fighter, so the B-17s would go in unprotected. The solution was to hit the two targets in a coordinated "double-strike," with the Regensburg strike hitting first, drawing off the defending Luftwaffe fighters, and leaving the way clear for the Schweinfurt bombers. The Regensburg force would carry on over the Alps to North Africa, the first example of US "shuttle bombing."

Although the attack on Regensburg was successful, the damage to Schweinfurt only temporarily stalled production, and the Eighth Air Force had suffered heavy losses. It would take a sustained campaign, not just a single raid, to cripple the Schweinfurt works. However, when a follow-up raid was finally launched two months later, the losses sustained were even greater. This title explains how the USAAF launched its daylight bombing campaign in 1943, the technology and tactics available for the Schweinfurt-Regensburg missions, and how these costly failures forced a change of tack.