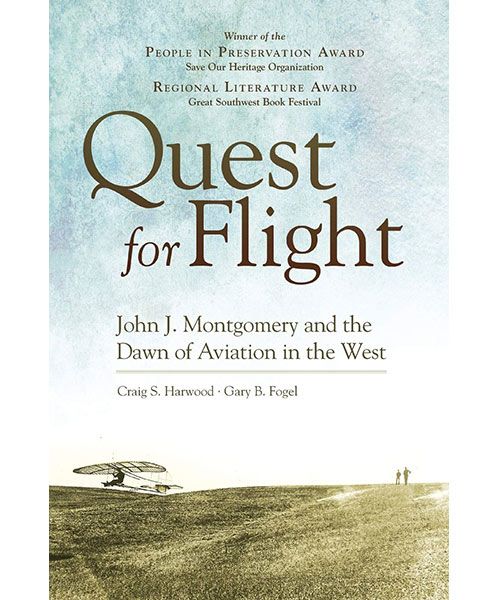 $19.95
Availability: In stock
SKU
BOOK108101
Notify me when the price drops
Add to Compare
Details

Quest For Flight: John J. Montgomery and the Dawn of Aviation in the West

The Wright brothers have long received the lion's share of credit for inventing the airplane. But a California scientist succeeded in flying gliders twenty years before the Wright's powered flights at Kitty Hawk in 1903. Quest for Flight reveals the amazing accomplishments of John J. Montgomery, a prolific inventor who piloted the glider he designed in 1883 in the first controlled flights of a heavier-than-air craft in the Western Hemisphere.

Re-examining the history of American aviation, Craig S. Harwood and Gary B. Fogel present the story of human efforts to take to the skies. They show that history's nearly exclusive focus on two brothers resulted from a lengthy public campaign the Wrights waged to profit from their aeroplane patent and create a monopoly in aviation. Countering the aspersions cast on Montgomery and his work, Harwood and Fogel build a solidly documented case for Montgomery's pioneering role in aeronautical innovation.

As a scientist researching the laws of flight, Montgomery invented basic methods of aircraft control and stability, refined his theories in aerodynamics over decades of research, and brought widespread attention to aviation by staging public demonstrations of his gliders. After his first flights near San Diego in the 1880s, his pursuit continued through a series of glider designs. These experiments culminated in 1905 with controlled flights in Northern California using tandem-wing Montgomery gliders launched from balloons. These flights reached the highest altitudes yet attained, demonstrated the effectiveness of Montgomery's designs, and helped change society's attitude toward what was considered "the impossible art" of aerial navigation.

Inventors and aviators working west of the Mississippi at the turn of the twentieth century have not received the recognition they deserve. Harwood and Fogel place Montgomery's story and his exploits in the broader context of western aviation and science, shedding new light on the reasons that California was the epicenter of the American aviation industry from the very beginning.