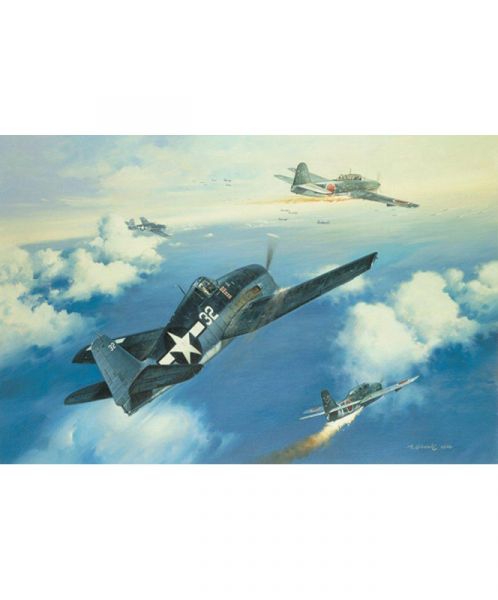 $150.00
Availability: In stock
SKU
ZACE000212
Notify me when the price drops
Add to Compare
Details
The weather was clear with scattered cumulus clouds off the coast of Saipan on the morning of 19 June, 1944. As part of Task Force 58 protecting the Marianas landings, Fighting Squadron 16 was expecting an attack from the 400-plane Japanese carrier force. At 1030 bogeys were picked up on radar approaching in several large groups and twelve Hellcats were launched from the USS Lexington to intercept the Japanese force. Twelve-victory ace, Lieutenant (jg) Alex Vraciu was one of the pilots in that group. Leading a division of four Hellcats, Vraciu experienced engine problems and couldn't climb past 20,000 feet, but requested a vector from the fighter director and was put onto a line of Yokosuka D4Y2 'Judy' dive bombers. In the eight-minute tail chase, Vraciu splashed six. The air battle became known as the Great Marianas Turkey Shoot, Task Force 58 Hellcats destroyed over 300 Japanese aircraft. The following day, Alex Vraciu claimed his 19th and last victory, a Zeke. The print measures 24x30 inches and is signed by the pilot and the artist, Roy Grinnell.
More Information
Who Viewed This Also Viewed