THANK YOU FOR YOUR BUSINESS! | MUSEUM MEMBERS RECEIVE FREE SHIPPING ON ORDERS $75+ | ORDERS SHIP EVERY FRIDAY
Your purchase supports the preservation of our museum collection and the educational mission of The Museum of Flight
Skip to the end of the images gallery 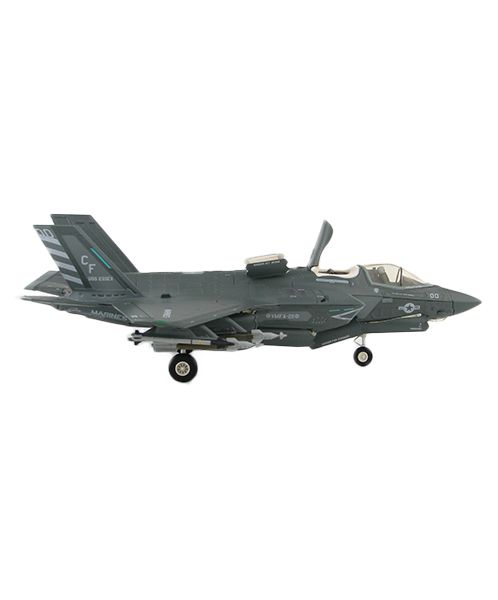 $129.95
Availability: In stock
SKU
DESK215487
Notify me when the price drops
Add to Compare
Details

In September of 2018 VMFA-211 was deployed aboard the U.S. Navy Wasp-class amphibious assault ship USS Essex. On the 28th of September an F-35B carried out a strike against Afghan Taliban. This marked the first time a U.S. F-35 Lightning was used in combat when it delivered a precision-guided bomb. The aircraft wore the name Lt. Col Chris “Otis” Raible on the side under the cockpit to honor the former commander of VMFA-211 killed in Afghanistan in 2012. Later in 2018, mission markings were applied to F-35B 169415’s front landing gear door.

The Lockheed F-35 Lightning II is a fifth generation multi-role fighter aircraft that combines radar evading stealth technology with supersonic speed and extreme agility. The three variants of the Lightning II are the F-35A, B, and C. The F-35A is the conventional takeoff and landing (CTOL) variant. It features two internal weapons bays and six external hardpoints for mounting a variety of weapons under the wings plus an internal 25 mm cannon. The F-35B is the short takeoff and vertical landing (STOVL) variant while the F-35C is the aircraft carrier-based variant. The F-35 was developed to replace the U.S Air Force F-16 Fighting Falcon, U.S. Navy F/A-18 Hornet and the U.S. Marine Corps F/A-18 Hornet and AV-8 Harrier II.

The F-35 Lightning II was first flown on December 15, 2006 and is entering operational service with the United States military and the air forces of several other nations that were partners in the development of the aircraft.

Hobby Master is a manufacturer of high quality, pre-built, diecast models. Each model is crafted with meticulous attention to detail, using specifications of the original aircraft or vehicle. They are made with precision-tooled die-cast metal and some plastic components.