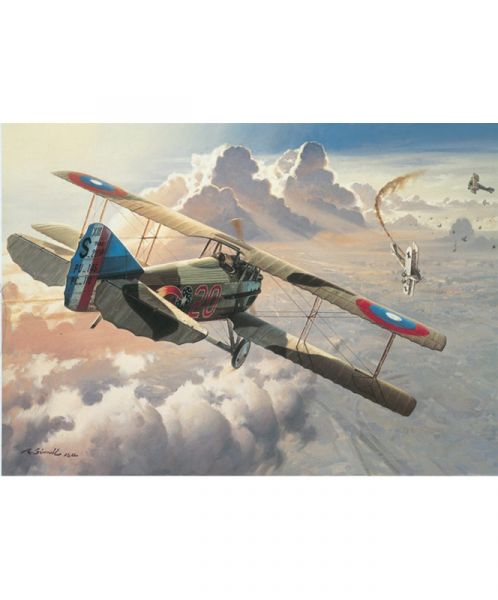 $175.00
Availability: In stock
SKU
ZACE000203
Notify me when the price drops
Add to Compare
Details
Heavy fog shrouded the American airdrome at Souilly, France, on 9 October 1918. At noon it began to clear, allowing Lt. A Raymond Brooks, to take off, leading a flight of seven other SPAD XIIIs of the 22nd Aero Squadron. Brooks was flying number 20, with the inscription 'Smith IV' beneath the cockpit, in honor of his fiance who attended Smith College in North Hampton, Massachusetts. They climbed out to 3,500 meters, setting their course for the Verdun area. At 1350 hours they spotted four German two-place DFW (Deutsche Flugzeugwerke) observation planes escorted by nearly a dozen Fokker D-IIs. Brooks led his flight to the attack. In the ensuing battle one of the DFW's fell to Brooks' guns, his sixth and final victory. Flight member Lt. Clinton Jones downed another, which brought his total to five and made him an ace. The print measures 24x30 inches and is signed by the pilot and the artist, Roy Grinnell.
More Information
Who Viewed This Also Viewed