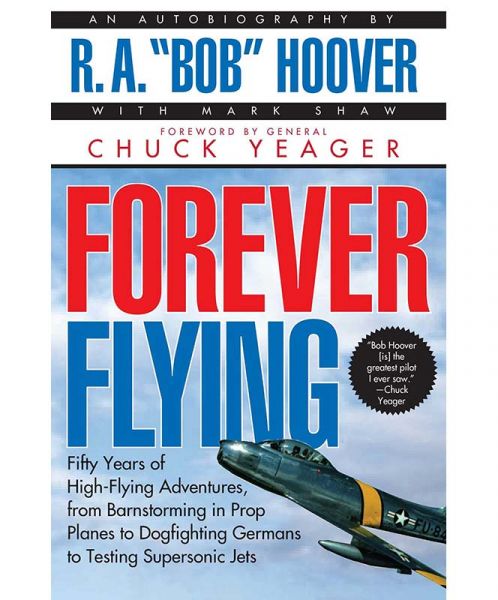 $17.00
Availability: In stock
SKU
BOOK109082
Notify me when the price drops
Add to Compare
Details
Barnstormer, World War II fighter, test pilot, aerobatic genius -- Bob Hoover was a living aviation legend, the man General James "Jimmy" Doolittle called "the greatest stick and rudder pilot who ever lived." Hoover's career spans the history of American aviation, and here he tells his amazing story with all the flat-out honesty and gusto that made his life an extraordinary adventure.

At twenty-two, Hoover was a decorated World War II fighter pilot, already famous both for his aerobatic abilities -- including looping under a bridge in Tunisia -- and for surviving seventeen equipment-failure crash landings as a test pilot. Then the Germans knocked his Mark V Spitfire out of the sky. He made three attempts to escape en route to the infamous Stalag I prison camp, and after sixteen brutal months, finally escaped by stealing a German plane and flying it to Holland.

After the war, Hoover tested the first jets at Wright Field, dogfighting Chuck Yeager, the man who'd come to call him "Pard." In the quest to break the sound barrier in the Bell X-1, Hoover endured every step of the grueling G-force training along with Yeager. But soon after Yeager's historic flight, Hoover broke both his legs in a desperate bailout from a blazing F-84 Thunderjet -- dashing his dreams of flying the X-1 himself.

In "Forever Flying," we relive the thrills and danger Hoover continued to face as a civilian test pilot: testing the first jets to take off and land aboard aircraft carriers; flying bombing runs over North Korea; and demonstrating new planes for fighter pilots, who had to be warned not to attempt to duplicate Hoover's spectacular spins, stalls, and rolls. He became an adviser to engineering on the X-15 rocket, and rose through the corporate ranks, famed for flying his daring aerobatics routines in a business suit and straw hat instead of a pilot's "G suit."

Bob Hoover flew more than 300 types of aircraft and dazzled crowds at more than 2,000 air shows all over the world. He set both transcontinental and "time to climb" speed records, and knew such great aviators as Orville Wright, Eddie Rickenbacker, Charles Lindbergh, Jacqueline Cochran, Neil Armstrong, and Yuri Gagarin, who saved Hoover from the KGB at an international aerobatics competition in Moscow during the height of the Cold War.

Spiced by reminiscences from fellow fliers, friends, and his wife, all of whom recount Hoover's devilish practical jokes as well as his death-defying flights, "Forever Flying" reveals the magnificent true story of a great American hero.