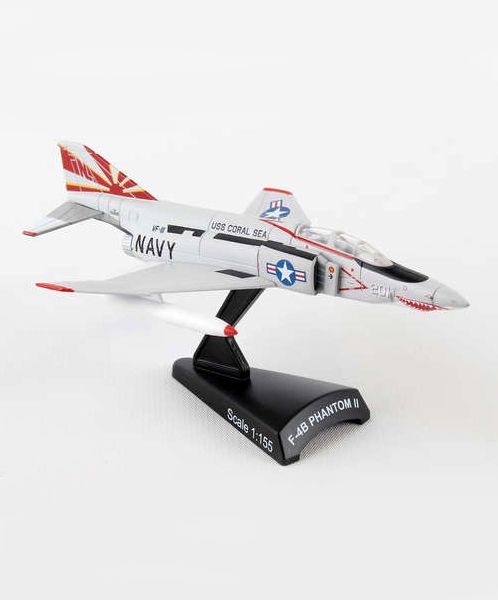 $24.95
Availability: In stock
SKU
MODL226118
Notify me when the price drops
Add to Compare
Details

The McDonnell Douglas F-4 Phantom II is regarded as one of the most successful fighter designs of all time. An American two seat, twinjet, all weather interceptor, fighter/fighter-bomber aircraft, its first flight occurred on May 27, 1958. With top speeds more than twice the speed of sound, the F-4 established 16 speed, altitude and time-to climb records. An all-around performer the F-4 Phantom II simultaneously server the USAF, USN, and the USMC, the first American aircraft to do so, whole also serving approximately 11 other countries.

Fighter Squadron 111 (VF-111), also known as the Sundowners is perhaps the most famous Pacific fleet squadron with an iconic insignia. During the Vietnam War, VF-111 made seven deployments, flying over 12,500 combat missions. In 1971, VF-111 joined the CVW-15 (NL), on board CVA-43 USS Coral Sea, and transitioned to the F-4 Phantom II. During this deployment LT. Weigand and LT JG Freckleton downed a MiG-17 on March 6, 1972 near the Tonkin Gulf.