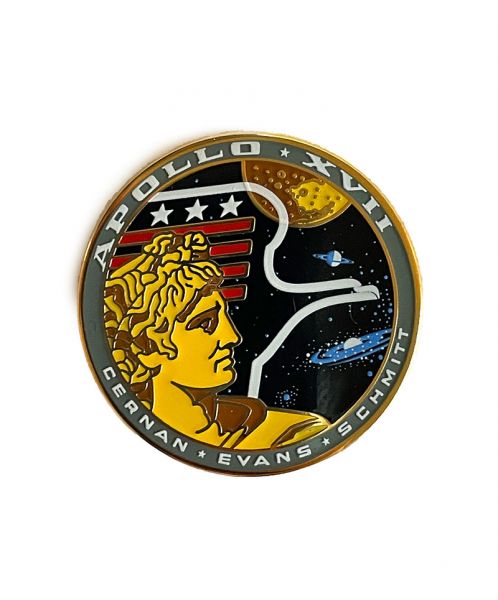 $5.95
Availability: In stock
SKU
JWLR184201
Notify me when the price drops
Add to Wish List Add to Compare
Details

The Apollo 17 mission marked the sixth successful lunar landing and return flight as well as the last flight of the Apollo Program. The flight to the Moon was near routine and the Lunar Module Challenger landed at Tarus-Littrow on December 11 at 2:00 PM EST.

During three traverses with the Lunar Roving Vehicle, astronauts Cernan and Schmitt stopped at numerous pre-Planned points to conduct geological observations and to collect rock samples while astronaut Evans operated scientific equipment in the Command Service Module America in lunar orbit. The mission marked the first geological astronaut (Schmitt) on the lunar surface; the longest time spent on the Moon (74 hours, 59 minutes); the greatest distance traveled by the Lunar Roving Vehicle an one trip (21.75 miles); the most lunar rock samples returned to Earth (250 lbs.). Lunar liftoff occurred on December 14 at 5:45 PM EST. After completing a record 75 revolutions of the Moon, the Command Service Module America departed for Earth, The astronauts landed safely in Mid-Pacific on December 19. Mission duration was 12 days, 14 hours